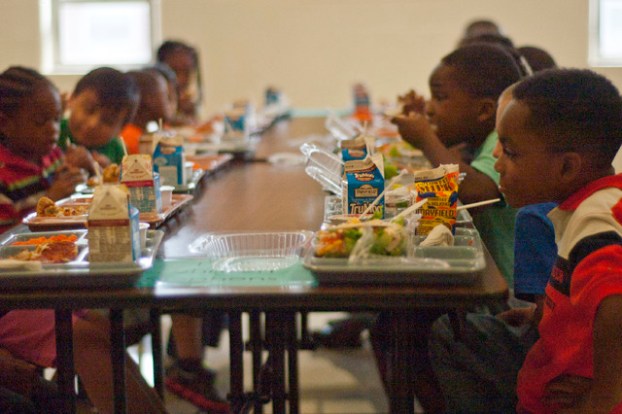 Students line up and take trays during lunch at Whitesville Road Elementary School on Monday.

http://lagrangenews.com/wp-content/uploads/sites/37/2015/08/web1_WEB0818Charwells032.jpgStudents line up and take trays during lunch at Whitesville Road Elementary School on Monday. A Whitesville Road Elementary School kindergarten student works to get the last bit of milk from his carton Monday as fellow students eat.

http://lagrangenews.com/wp-content/uploads/sites/37/2015/08/web1_WEB0818Charwells042.jpgA Whitesville Road Elementary School kindergarten student works to get the last bit of milk from his carton Monday as fellow students eat. LaGRANGE — Troup County students may notice a change in food offerings this year.

On July 1, the Troup County School System switched to a new management company to handle its food service. Chartwells took the helm after a bidding process affirmed by the Board of Education in April, beating out former vendor Sodexo, which had been the contracted server since 2010.

“Right now we supply for millions of kids — not thousands, millions,” Phipps said Monday as he sat in the cafeteria of Whitesville Road Elementary School with children eating at the surrounding tables. “Our goal is to supply food that is nutritious and delicious.”

When the school system in 2010 contracted out to Sodexo from in-house service, the company took over its nutrition department employees. Likewise, Chartwells has now taken over those employees in the Troup County School System.

The transition didn’t cut any nutrition staff, said Diane Pain, director of school nutrition for Troup County School System. It actually added three assistant managers — making a total of six for the system — which she said is for more direct management of nutrition staff at schools.

Chartwells officials started training staff over the summer and brought in an instructor from the National Food Service Institute in Mississippi as part of the process, Pain said.

The company will be responsible for about $5.72 million of the school system’s $6.65 million food services expenses budgeted for the fiscal year that started July 1.

Chartwells’ agreement with the school system includes a $120,000 guarantee for the school system in case of budget overages, and its contract also includes funding $7,140 each year for a backpack program, estimated to purchase at least 51 backpacks for students. It also will annually fund scholarships equal to $5,000 for high school students, according to school system documents.

The company, like its predecessor, must follow USDA guidelines on nutrition requirements that include limits on calories, sugar and sodium.

“In this district, we have a regional dietitian who comes up with a menu … that regulates what we serve the kids,” Phipps said. The dietitian “makes sure the USDA guidelines and regulations are met.”

Phipps said the group still strives to find the foods that children will enjoy. The company will periodically host events where children can survey different food options to help determine what will make up the menus.

“Some time between now and Christmas we will host a gala … we want it to be like a field trip at school,” Phipps said of the taste-testing events. “There will be a lot of vendors and the children can taste samples and give them a smiley face, frowny face or neutral.”

The simple system will make the surveys easy for even the youngest students, he said. Chartwells already hosted one event last year with small taste tests at each school, but Phipps said the planned gala will be “on a grander scale.”

“We did it that way first to make sure it would be good for parents and students,” she said.

Menus are planned to rotate on a five-week schedule, utilizing different food items chosen in the taste testings.

“We are very particular about new items,” said Pain. “We don’t want to give out pizza and chicken nuggets all day long.”

She noted one of the more creative offerings chosen by taste test is wild watermelon apple sauce.

“Choices — that’s one of the concerns we heard from teachers,” Phipps said. “There are so many items to choose from, hot and cold.”

Phipps said the company also is providing more fresh fruit choices to the schools than were previously available.

“I’ve made it a point to eat breakfast and lunch here,” said Whitesville Road Elementary Principal Debra Brock as she sat in the school’s cafeteria Monday. “I think the children are happy with the choices and tastes offered.”

New choices also include options for students who do not eat meat.

“We did make sure we have a meatless entree,” Pain said. “So if we have a student who does not eat meat for personal or religious reasons, they have a choice available every day.”

The group also aims to offer more salads and vegetables with meals, Phipps said. He added that company also aims to buy produce grown in Georgia or adjoining states.

“The majority of kids eat all of the food on their tray and a variety … and it’s important the children enjoy what they eat,” Brock said.

Phipps pointed to a nearby table of kindergarten students and noted they were eating salads and appeared to be enjoying them.

“Years ago, kids did not eat like that,” he said. “… Our goal is to train the kids here to have that healthy foundation.”

When the Daily News asked a few kindergartners munching on salad if they were enjoying their meals, they nodded in approval.

More information about Chartwells is available at chartwellsschools.com.