There’ll be no shortage of playmakers 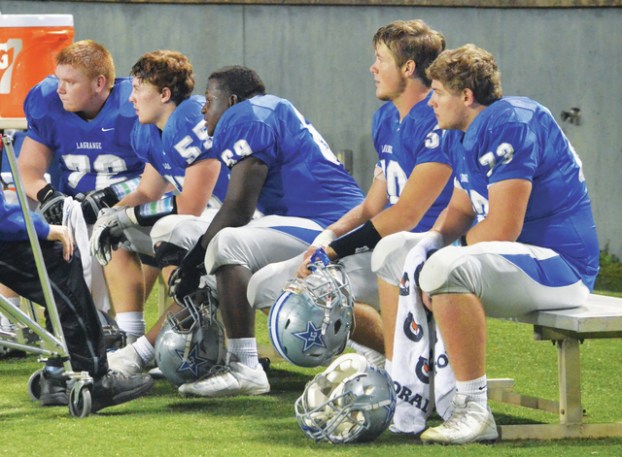 Senior Guy Wegienka is one of the leaders on LaGrange’s offensive line. Kevin Eckleberry | Daily News

http://lagrangenews.com/wp-content/uploads/sites/37/2015/11/web1_11-4-LHS5.jpgSenior Guy Wegienka is one of the leaders on LaGrange’s offensive line. Kevin Eckleberry | Daily News LAGRANGE – They had to carry on.

During the LaGrange High spring football game, senior Luke Elder went down with a knee injury, and the team was faced with the prospect of playing the upcoming season without its top offensive lineman.

It was a major blow, but the Grangers have overcome that significant loss.

As the Grangers head into their regular-season finale against the Northside Patriots, they have a chance to finish second in the region, and a prolific offense is a big reason why.

LaGrange has scored 125 points in its past three games, and the team had a pair of 100-yard rushers in last week’s 30-20 victory over Harris County.

It begins up front.

Even without Elder, who has verbally committed to the University of North Carolina, the offensive line has been a position of strength for the Grangers.

The Grangers have scored 35 or more points in six of their nine games, and they had a season-high 50 points against a Carver team that won the region championship.

While the Grangers have some exceptional skill players, it’s the offensive line that gives quarterback LaPerion Perry and the running backs the holes to run through.

“(Losing Elder) was a big loss, obviously, but we faced some adversity and got through it,” said Coy Tedescucci, a junior left tackle. “We all came together.”

LaGrange head coach Dialleo Burks said the linemen have made tremendous progress under the direction of offensive coordinator Jay Floyd.

“It starts with the leadership,” Burks said. “Coach Floyd has done a great job of challenging those guys, to get them to understand his way of thinking. He’s done that ever since the first day of spring. Some fought it, but the overall group, they embraced it, embraced what we wanted to do. They went with it, and that’s why they are as close as they are.”

Against Harris County, LaPerion Perry, who is having a sensational junior season, had 169 yards on the ground with four touchdowns, and senior running back Undriel Copeland ran for 140 yards.

That sort of success doesn’t happen without a strong effort from the offensive line.

Jordan Ragan, a junior left guard, said Perry and all the running backs always show their appreciation for the offensive linemen.

“We get a lot of thanks from them,” Ragan said. “They always say they can’t do what they do without us. And I love what they do.”

There have been some changes as the season has gone along, with players moving in and out of the lineup and to different positions, but everyone has come together.

“At the beginning of the year, I moved around a lot,” Ragan said. “I started at right guard. We just found the spots where it worked the best.”

The original plan, before the injury, was to have Wegienka and Elder providing the book ends on the offensive line from their tackle positions.

After Elder was lost, some reshuffling was obviously in order.

“Me and Luke were going to be the two tackles,” said Wegienka, who is also a standout on the wrestling team at LaGrange. “It was going to be us, the seniors on the end. But the way it turned out, we have Coy at right tackle, and he played some last year, and Jordan played some last year and right guard. And Payne is a rookie starting, but he’s doing a good job this year. And we have the two seniors on the line, me and Clark. It just ended up like it is now, and everything worked out pretty good.”

Tedescucci said all of the offensive linemen are “growing together.”

“We’re always together,” he added. “We’ll come in after practice and go over plays and stuff like that.”

Richard Gaskin, one of the talented backups on the offensive line who plays both guard positions, said “a group that works together, succeeds together.”

“I’m a technique guy,” Ragan said. “I work trying to get the right steps and everything. The other part is not being afraid of somebody bigger than you, somebody stronger than you, which is most of the time. And you just play hard.”

When a big play is sprung, everyone in the stadium is watching as Perry, or Copeland, or Kimani Barnes, or one of the other running backs takes off downfield.

The offensive linemen know those kind of plays aren’t possible unless they do fulfill their responsibilities, though, and that brings them plenty of satisfaction.

“When you feel a running back cut off of you, that’s the best feeling ever, when you feel a big play happen because you do your part,” Ragan said.

Gaskin added that “you can’t have a good play without a good line. We have to do our job.”

The offensive linemen will try to do their job once again on Saturday in a critical showdown with Northside.

A victory would secure second place in Region 1-AAAAA for the Grangers, and they would host a state-playoff game the following weekend.

“We’re going to prepare hard,” Tedescucci said. “We’ve got a lot left to do, but I think if we go out and execute the blocking schemes, the runners behind us will do their job.”