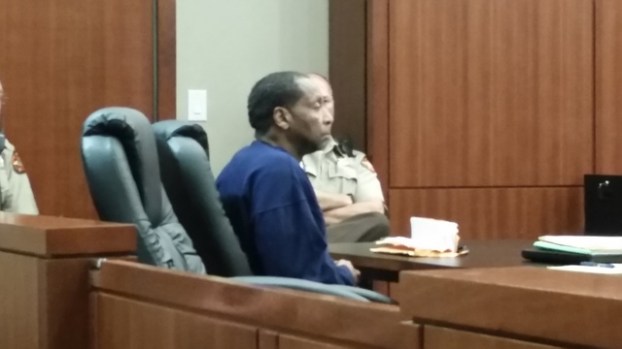 Stanley Donnell Terrell Sr., 58, watches his attorney, Cliff Rhodes, make his closing argument from behind the defense table. Terrell was found guilty Wednesday of aggravated assault, aggravated battery and possession of a knife during the commission of a felony for stabbing Dexter Johnson, 43, on Jan. 25.

http://lagrangenews.com/wp-content/uploads/sites/37/2015/12/web1_Terrell-Verdict-017.jpgStanley Donnell Terrell Sr., 58, watches his attorney, Cliff Rhodes, make his closing argument from behind the defense table. Terrell was found guilty Wednesday of aggravated assault, aggravated battery and possession of a knife during the commission of a felony for stabbing Dexter Johnson, 43, on Jan. 25.

LaGRANGE — It took a Troup County Superior Court jury less than two hours on Wednesday to convict a man for stabbing an acquaintance following a heated argument and a night of drinking.

Stanley Donnell Terrell Sr., 58, was found guilty of aggravated assault, aggravated battery and possession of a knife during the commission of a felony. His face showed no emotion as the verdict was read.

Presiding Judge John Simpson immediately sentenced Terrell and gave the man a total of 40 years in prison for two of the charges against him, plus five years probation. Simpson told Terrell he must serve at least 34 years of his sentence behind bars.

Troup County Assistant District Attorney and Prosecutor Jim Powers and investigators told jurors Terrell was involved in an argument with Dexter Johnson, 43, in a shed behind a home in the 700 block of Hill Street on Jan. 25.

According to Powers and LaGrange Police Investigator Charles Brown, Terrell became upset after Johnson made some negative comments about his girlfriend.

An eyewitness, Elizabeth Johnson (no relation to the victim), and the victim both testified Terrell walked out of the shed, but returned a short time later.

“He came back and walked up to me and pulled up his shirt and showed me a butcher knife with a pearl handle,” Johnson told the court. “I told him, ‘You need to go on with that, man … that’s when he stuck me in the groin area. Then I pushed him off of me, and he tried to come back at me again and I grabbed it (the knife) with my hand.”

According to police, Johnson was stabbed twice in the stomach and also had deep cuts to his right hand. He was airlifted that night to Columbus Medical Center.

Powers showed the jury pictures the investigator, Brown, took of Johnson’s injuries, including a vertical stab wound that started in his lower abdomen and ended above his belly button.

Johnson testified he suffers from permanent nerve damage in his hand from where he tried to prevent Terrell from stabbing him again.

But Terrell’s attorney, public defender Cliff Rhodes, poked holes in both the victim’s and eyewitness’ testimonies.

Rhodes pointed out Dexter Johnson was drinking that night and said he could not remember everyone who was in the shed, how many times he was stabbed or how he got to the hospital.

Rhodes also discounted much of Elizabeth Johnson’s eyewitness testimony in his closing argument, since she did not see exactly where the knife came from on Terrell’s body or who grabbed for it first.

While Terrell never took the stand, the prosecution played a portion of his initial interview with Brown, which was videotaped hours after the stabbing.

The 58 year old claimed Johnson put his hand in Terrell’s pocket and tried to take the knife out of a sheath. Terrell said he tried to stop him.

“We got to tussling, you know … we had been drinking and stuff … and one thing led to another … and he got cut,” he told Brown.

Senior Police Officer Wesley Engle, who was a detective with LPD’s Criminal Investigation Section in 2002, testified Terrell was the suspect in another aggravated assault on April 24, 2002, where a man, Clyde Brown, was cut with a knife after a verbal altercation over a $5 cab fare.

“He (Terrell) said Brown (the victim) removed the knife from the sheath he was wearing and was trying to cut him (Terrell),” Engle said. “But he said instead, Brown was the one injured.”

According to Powers, Terrell pleaded guilty to the aggravated assault charge and was sentenced to serve five years behind bars, with another five years on probation.

Powers once again showed the jury photographs taken of Brown’s wounds, which included a large cut across his throat and numerous lacerations on his upper torso.

“What the defense wants you to believe does not make sense,” Powers told the jury during his closing argument. “Twice in his life, someone went for his (Terrell’s) knife and ended up with injuries, and both times, he ended up with none. … The scars you saw on Mr. Johnson were not accidental. Those are not accidental cuts.”

After Judge John Simpson handed down the punishment for his most recent crime, Terrell stood up and smiled at some people in the back of the courtroom before being led out by Troup County Sheriff’s deputies where he was taken back to the jail.