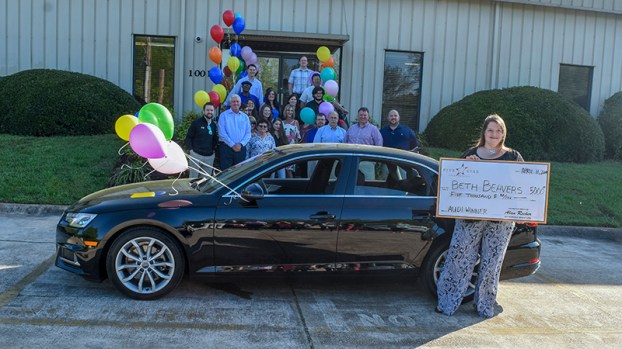 Beth Beavers, a LaGrange resident, has had a difficult time lately, but a recent purchase changed her life in an unbelievable way.

Beavers bought a Jamwich, a frozen peanut butter and honey sandwich, at her job and was entered into a Five Star Food Service giveaway. Months later, that Jamwich purchase — a couple of dollars, at most — turned into a brand-new Audi A4, which sells for around $40,000.

Beavers was presented the car and a $5,000 check to help with taxes in front of the LaGrange location of Five Star Food Services Thursday morning. Beavers purchased the Jamwich through a Five Star micro-market, which is essentially a small convenience store space set up in an office building. Five Star has over 1,200 micro-markets across the Southeast, according to its website, and services locations in Alabama, Georgia, Mississippi and Tennessee.

“Since six months ago, I didn’t have a car at all,” Beavers said. “Then, my mom and I went in together and bought a car, so we’ve been using the same car and sharing it. I just lost my job, so this is hope.”

The $5,000 check was to help pay for any taxes associated with the car purchase.

“[The micro markets] allow us to provide three or four times the variety of snacks. We can add fresh food in, sandwiches, wraps and that kind of things,” said C.J. Recher, vice president of marketing for Five Star Food Service. “We can also provide all sorts of beverages instead of just the traditional Coke and Pepsi products that you see in a vending machine.”

Every quarter, Five Star holds a mega-promotion and holds a random drawing for a name. Beavers was the lucky winner this quarter, and took home the biggest prize anyone in LaGrange has won so far.

Beavers said she had always wanted an Audi, so her luck was even more special.

“I just want to thank God for his love for me and how he shows his love for me,” Beavers said. “It’s not just through emotional things, it’s through physical things as well.”

Mark Stephanos, senior vice president of micro markets for Five Star, said the company enjoys the giveaways, especially when they mean so much to the person who wins.

“We’ve been very fortunate in giving these away. It’s been a lot of people that are really deserving.  They are at a certain place in their life where they didn’t think they’d be able to get something like that. We have given away cash prizes or a car and it changes their life. It’s such a joy to see someone have that kind of excitement,” Stephanos said.

“The first thing is they can’t believe it and think it’s a scam. It’s a wonderful way to spread a lot of goodwill.”