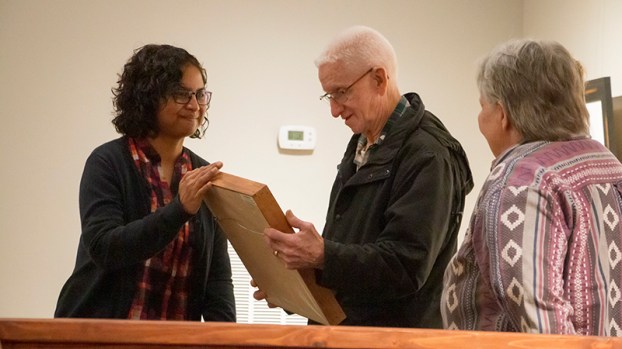 The Suffering Artist in Hogansville hosted its fourth annual salute to veterans Saturday night with the opening of “The Ashes of His Fathers: Dedicated to Veterans,” and a special dedication to Hogansville native Sgt. Billy Joe Maxwell.

Maxwell lost his life fighting in the Korean War in the 1950s and was reported missing in action Nov. 30, 1950, and his remains were not recovered.

Almost seven decades later, Maxwell’s remains were returned to the United States and brought back to Hogansville. He was laid to rest on Nov. 7.

A local artist, Lata Fields, said she had followed along with Maxwell’s homecoming and felt inspired to draw a portrait of him.

“It has been an amazing emotion with him coming back after almost 70 years,” Fields said. “I got the photo from his funeral. It was his Army service photo.”

Fields presented the portrait of Maxwell to his oldest surviving brother, Pete Maxwell, who still lives in Hogansville.

“I was 14 years old when he was announced missing,” Pete said. “I am going to cherish this forever. I love it, and it just looks like him.”

Fields said she had never met the family before drawing the photo of Maxwell.

In addition to several visitors and artists viewing the opening of the exhibit, state representative Bob Trammell also spoke.

“It is such a special way to remember and honor our veterans,” Trammell said. “Many of us will never know what it is like to serve abroad or be in a foreign country defending our freedom. What I experience when I am here and interacting with the art is that it engages us, it engages our minds in a way that it gives us some momentary understanding and appreciation.”

Chris Swanson of the Suffering Artist said this is one of his favorite shows.

“Tonight will be a little extra special than usual,” Swanson said. “The art is always moving… but this year we have an even more meaningful experience.”

The exhibit will be on display at The Suffering Artist at 311 East Main Street in Hogansville through New Year’s Day.

Pete said that he now has to find a spot to hang his brother’s portrait.

“It is such a good picture,” Pete said. “I don’t know where I am gonna hang it, but it’s got to be in the perfect spot.”

The gallery is open on Saturdays from 11 a.m. to 4 p.m. For more information, visit thesufferingartist.com.

Viewings can also be made by appointment.