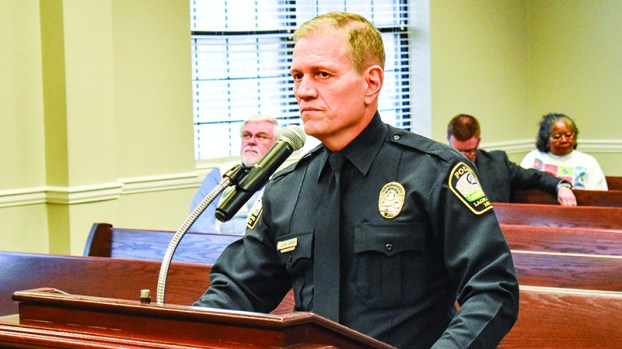 The shelter-in-place executive order signed by Georgia Gov. Brian Kemp replaces all local ordinances that have been passed in local governments across the state, according to LaGrange City Attorney Jeff Todd.

Thornton leaned heavily on Todd to interpret the meaning of Kemp’s order as to how it affects the lives of those in the city of LaGrange and throughout Troup County.

Todd said the order state that residents are to stay in their homes unless they need to travel for work, groceries or essential activities for their household.

Examples of such businesses are healthcare, telecommunications, food and agriculture, water and wastewater, law enforcement and public works.

Other businesses deemed non-essential are allowed to be open but cannot have more than 10 people in a single location unless they can be at least six feet between people at all times.

Additionally, such businesses must adhere to a list of 20 requirements provided by the shelter in place order.

Businesses that have been ordered to close include those with a high probability of people congregating together, such as bars, nightclubs and gyms. Restaurants throughout the state have also been closed for dine-in service. However, Kemp’s order does allow for takeout, delivery and curbside pick-up.

Kemp’s statewide order is set to expire on April 13, and after that, city leaders seem a bit unclear as to what happens next. LaGrange’s state of emergency ordinance was adopted on March 17 and was set to last for 60 days. However, that ordinance is no longer active due to Kemp’s order. Additionally, West Point enacted a curfew, but since the executive order supersedes those local ordinances, anything before Thursday is now void. Kemp’s order is now known as the statewide standard.

Todd said the statewide order does allow for individuals to exercise and be close to family members while in public. That means families can exercise together at The Thread in LaGrange. However, if it is a person they are not cohabitating with, they must maintain a six-foot distance at all times.

Dekmar said the best example of social distancing and still running a business is Home Depot in LaGrange. He said after receiving complaints about social distancing, the police contacted them, and the store immediately complied. Dekmar said Home Depot has a designated exit and entry door and no more than 75 people in the store at one time, as some of the examples.

Dekmar said when it comes to enforcement, businesses will need to figure out what they need to do to be successful.

“The key, I think, for business owners is to understand that it is their responsibility if they are going to stay open to develop a process or procedure that ensures compliance,” he said.

As for individual citizens, Dekmar said the police have seen some difficulty in residents understanding the need to separate from their friends or business acquaintances.

“Despite the fact that The Thread is still open, of course, the best practices regardless of the relationship still is to embrace the six-foot, or more spacing, between individuals,” he said.

Dekmar said the police department requires officers to employ “occupational distancing” when responding to calls, meaning they are no less than six feet from citizens.

“That’s not only for the protection of the officer but also for the citizen,” he said.

Dekmar said he has five officers in the past two weeks who have been under self-quarantine due to possible exposure and the fact immediate testing isn’t available.

“I don’t think until this impacts employer, employees or families directly that the seriousness of this disease and the local impact will be felt,” he said.

Dekmar said the police department also has no plans to start pulling over vehicles that appear to be minding their business and checking on them. He said if people are shopping for groceries or medical supplies or taking care of normal business, they will be fine.

“But if we become aware of folks that appear to be cruising around, and we believe that they’re not complying with the governor’s order, then we might inquire,” Dekmar said.

Gaskin brought up a point about people smoking cigars, cigarettes and marijuana and sharing them between individuals as a point of contact.

“I’m not endorsing the use of marijuana, or cigars and cigarettes or anything of that matter, but we’re not talking about, and this is a possible point of transmission,” he said. “If you’re going to smoke, roll your own, smoke your own.”

He said it’s a bad practice to share between individuals because it’s a possible transmission point.