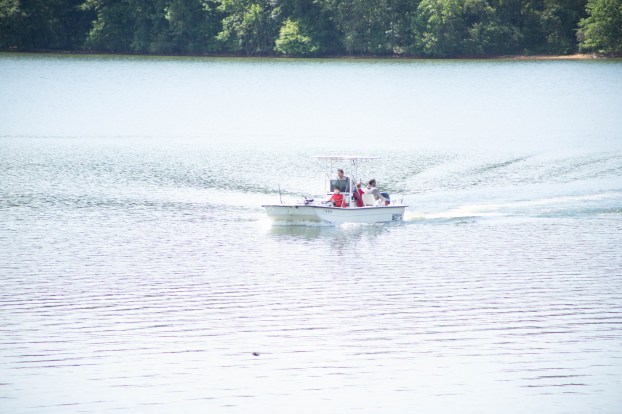 The Troup County Sheriff’s Office wants everybody to wear a life jacket while on the lake this Memorial Day Weekend. — Jenna Oden

The Troup County Sheriff’s Office is encouraging boaters to be safe on the water during Memorial Day weekend.

Stewart said that under no circumstance should the driver of the boat be drinking.

“Fire extinguishers are recommended in case a fire breaks out on the boat,” Smith said.

Due to the amount of out of towners that come to the lake, people need to know where they are on the water, Smith said.

“Even people that live here will get out on the water and get all turned around,” he said. “If you don’t know where you’re going, you can wind up somewhere in Alabama.”

Smith added bringing a charged cell-phone is a good idea in case of an emergency.

“You also need to know the rules of the water, and be familiar with your boat,” he said. “Don’t let the first time you’re taking your boat out be on a busy weekend like this weekend.”

On Memorial Day in 2019, a 34-year old male drowned at West Point Lake after jumping into the water to save his father, who had fallen into the water while their boat was tied under a bridge.

Smith said having a life jacket on or near at all times is essential to boater safety.

“Boaters also need to be aware of other boaters, and that includes the people on jet-skis,” Smith said. “I am sure there’s going to be a lot of watersports going on out there. Just be mindful of things in the water. Make sure you’ve got plenty of gas in your boat, and just pay attention to those things.”

Additionally, Smith said it’s a good idea to check the weather before venturing out on the water.

“The good thing about our lake is that we have buoys, and they are marked with numbers,” he said. “If there is an emergency and you have to call 911, they can figure out where people are at. But if you are out there and something happens, there may not be law enforcement out on the water, and it could take us some time to get boats launched.”