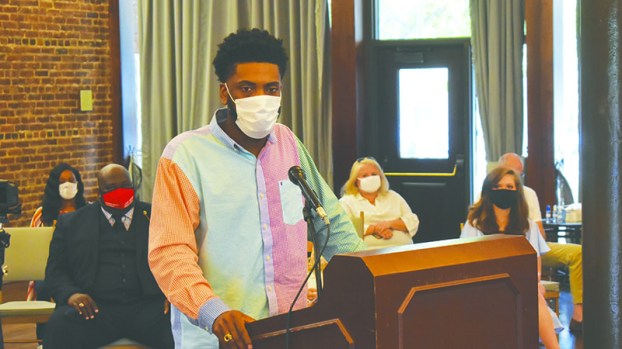 Above, City of LaGrange intern Wynton Heard speaks about his summer working for LGTV.

Of the state of Georgia’s CARES Act funding, 45% can be claimed by local governments, based on population.

The act states the funding can be used to pay for expenses incurred due to the pandemic, but not to replace revenue loss due to the pandemic. The city has spent about $100,000 in expenses, Thornton said, and is eligible for about $350,000 more from the state should they need it. However, Senate Majority Leader Mitch McConnell unveiled a new stimulus bill on Monday night in which funding from the CARES Act would retroactively be allowed for revenue replacement.

The city of LaGrange relies heavily on utility sales and hotel-motel taxes to fund government services, both of which have been hit hard by the pandemic and would fall under the revenue replacement category.

In other business, restaurants will have a bit more room to serve drinks outdoors, thanks to the council amending the alcohol ordinance. The ordinance was amended by the council to allow establishments to serve alcohol without a barrier, making more space for sidewalk cafes and outdoor alcohol consumption.

The change came at the request of the Downtown LaGrange Development Authority, as establishments seek to increase outdoor service to reduce COVID-19 transmission.

Also in the restaurant realm, the council approved an ordinance that will allow some parking spaces downtown to be converted to short-term parking. The city manager can identify up to one space per restaurant to be short-term parking, which allows people to park there for 15 minutes maximum, making takeout pickup easier.

The council voted to prohibit off-road vehicles from operating on public streets, sidewalks and other areas, following repeated reports and complaints of people using such vehicles to race and otherwise drive recklessly around the city.

Billy Easy, collections superintendent, was recognized for 25 years of service to the city.

4 The property at 407 N. Greenwood Street was rezoned, and C-1 square footage requirement and sign ordinances were tweaked to allow the adding of a coffee shop, Local Groundz, to open there.

4 Property at 610 Greenville Street was rezoned for a business there, One of a Kind Creation, to operate as an event center there.

The tariff to support the SOUL Energy Efficiency Program was also adopted.