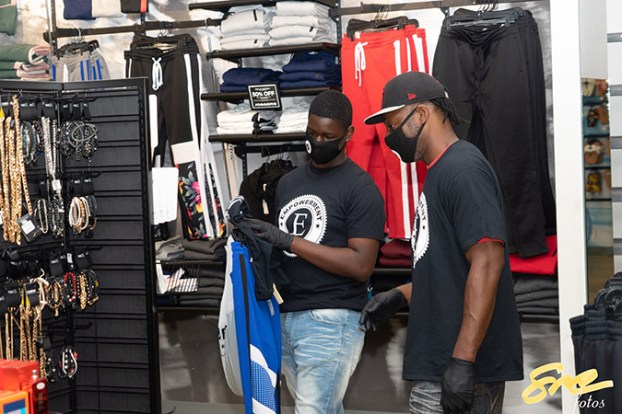 On Saturday, 11 students got the surprise of a lifetime. Empowerment 3D, a local mentorship program, raised $3,500 to divide between the 11 students so that they could buy school clothes and gear for the coming year.

In the past, Empowerment 3D has always taken a group of students on a trip or cruise before school starts. Due to COVID-19, Program Mentor Jerome Cofield said taking a trip this year wasn’t feasible, but they still wanted to do something for a local group of students.

“Last year on the cruise to Cozumel, the seven young men that we took on the trip took it upon themselves to pay it forward for a group next year,” Cofield said. “We took that money that they paid forward, and we matched it. Then, we got individuals from the community to partner with us and raise money to do the shopping spree.”

Cofield said three of the students found out what was happening beforehand, but that the rest were completely surprised Saturday when they got to the mall.

“One kid thought he was there to help volunteer,” Cofield said. “We sponsored 10 of the kids and another local organization, All Dads In, sponsored the eleventh student. We had the community submit names of students they believed needed it, and then we drew random names that were submitted.”

Cofield said they typically cater to the middle school population but opened this up to a few high schoolers as well.

“Without having to tell them, we watched each one of these students spend their money wisely,” Cofield said. “Each one had money left over that they paid forward for a group next year. So now we are already geared up for next year whether we are going to do a shopping spree or a trip.”

Students went through the LaGrange Mall and bought jeans, shirts, shoes and other basic necessities they needed for the school year.

“You know some of these kids may have never owned something name brand before,” Cofield said. “Now, they can have a few things nice and new to wear that they may have never had before.”

Empowerment 3D serves the southeast region so two students from Roanoke, Alabama, and another student from Valley, Alabama, were able to participate in the experience.

“We got them all there and said this day was created just for you,” Cofield said. “I told them this was their day to shop and get whatever they wanted to get.”

Over the next few months, the mentor program plans to hosts it monthly mentor and empowerment breakfast for young men and a father/son dinner to help empower dads or grandfathers.

“My dad left me at an early age, and I always wished I had someone there when terrible things happened,” Cofield said. “I didn’t have a dad there to show me the way. So, when I see kids have these strong emotions at events like this, I can feel it too. The emotions Saturday were incredibly strong.”

Cofield said he is always accepting donations so that they can help a student or host events to empower students. To make a donation, send money via CashApp to $Empowerment3D or a check to PO Box # 800264, LaGrange Georgia 30240.

“We always embrace donations and the help of the community,” Cofield said.