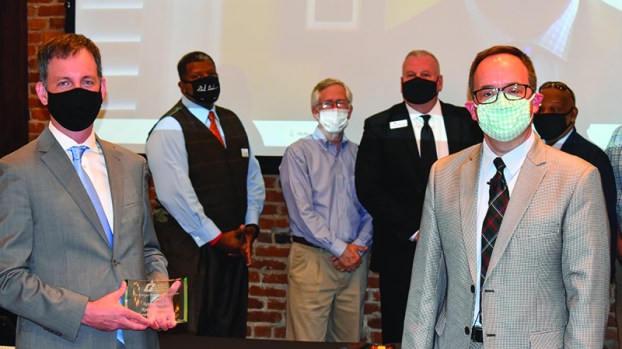 LaGrange Mayor Jim Thornton presented state Rep. Bob Trammell with a “Champion of Georgia’s Cities” award at the mayor and council’s work session Tuesday morning. The award recognizes a state legislator who has demonstrated commitment to the principle of home rule.

“One of the principles that the Georgia Municipal Association has always advocated for is what we call home rule. It’s the idea that each individual city, and county, should make decisions for themselves,” Thornton said. “Home rule is always under attack at the state legislature by legislators who sometimes think they know better, what’s good for LaGrange, than the six city council members and the mayor.”

GMA lobbies on behalf of Georgia cities, and Thornton is on its Board of Directors, serving as first vice president. Trammell, a Democrat who serves as minority leader of the state house, represents district 132, which includes part of LaGrange, as well as Grantville, Luthersville, Lone Oak, most of Hogansville and part of Newnan.

GMA director of government relations Tom Gehl addressed the council via video chat, which was projected onto a screen.

“I’m pleased to say that Representative Bob Trammell understands that local voices making local choices is preferable to having all decision-making flow through Atlanta,” Gehl said.

Trammell spoke about how his father, Robert Trammell Sr., inspired him to get involved in politics. After retiring, his father became mayor of Luthersville at a challenging time for the city. Trammell had just graduated law school.

“The city was in turmoil. There were lots of calls for investigation. And there were demands that the city surrender its charter,” Trammell said. “It was really that fight and that struggle that made an indelible impression on me about the importance of home rule.”

Trammell is running for reelection and will face Republican challenger David Jenkins, an air ambulance helicopter pilot. The seat is competitive, as Trammell beat a different challenger by a five percent margin, 749 votes, in 2018.