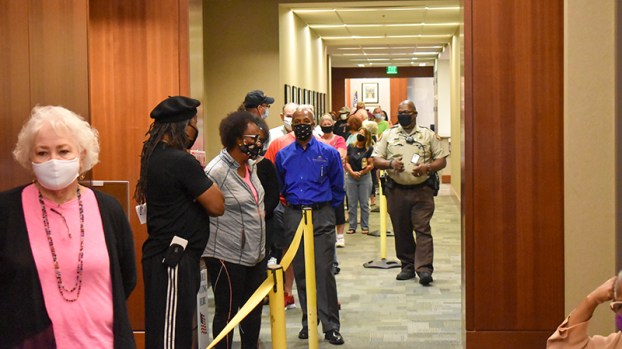 Voters in line at the Troup County Government Center.

Monday saw the first day of early voting in Georgia for the Nov. 3 election. For many Troup County voters trying to vote at the Troup County Government Center, casting their ballot meant waiting two hours or more.

The line stretched down a hallway, snaked through the lobby and, in the morning and around noon, went out the door and onto the front steps of the government center. While voters were masked, social distancing was not necessarily being observed throughout the line.

Sharon Slocan waited two hours to cast a ballot, but said she was glad she stuck it out.

“I was determined,” Slocan said, adding that she wanted to vote in-person and “see [her] vote count.”

Slocan was surprised that more voting machines weren’t in use.

Cornel Long, another voter who reported a two-hour long line, thought the county should have done more to have other early voting sites with more machines. Long also prefers voting in person.

“They say it’s always better to do it in-person,” Long said, adding that he had some uncertainty about absentee ballots.

As of press time, County Elections and Registration Supervisor Andrew Harper did not respond to requests for comment. It is not clear how many machines were in use.

The county approved a second early voting site in Hogansville last week. This is the first election that early voting is available there, Harper said last week.

Holly Reese, another voter who decided she didn’t want to wait, planned to come back Tuesday morning, but appreciated the turnout .

“That’s a good thing, I guess, that the line’s too long,” Reese said.

Caroline Lindsey, a Troup County voter who works in Hamilton, Georgia, said her boss gave her time off to vote, so it was now or never. She waited two hours and 40 minutes.

Larry Ninas decided not to vote Monday after seeing the long lines because he had to pick up his granddaughter. He thought the Columbus Day holiday may have caused more people to vote. A military veteran, he’s voted absentee before but feels in-person voting “makes you feel more part of the process.” Still, Nias, expects Election Day lines will be worse, and said he would vote on another early voting day.

“Everybody’s thinking the same thing,” said Peggy Patterson, who instead of waiting decided to come back another day.

Martha Atwater had just gotten in line to vote around 1 p.m., wearing an Alpha Kappa Alpha sorority T-shirt that read “Stroll to the polls” and “It’s a serious matter.”

“One thing we [Alpha Kappa Alpha] strive for, we believe in voting and having the right,” Atwater said.

Long lines were also reported at some voting sites in Metro Atlanta counties, according to news reports.

Early voting is available Oct. 12 to Oct. 3, Monday to Friday, 8 a.m. to 5 p.m., and on Saturday, Oct. 24, from 9 a.m. to 4 p.m. Voters registered in Troup County can vote at the government center or at the Hogansville City Hall Annex located at 600 East Main Street.

Voters can also mail in absentee ballots or drop off ballots at one of Troup County’s three ballot drop boxes. The boxes are located at the government center, West Point City Hall and the Hogansville Police Department.