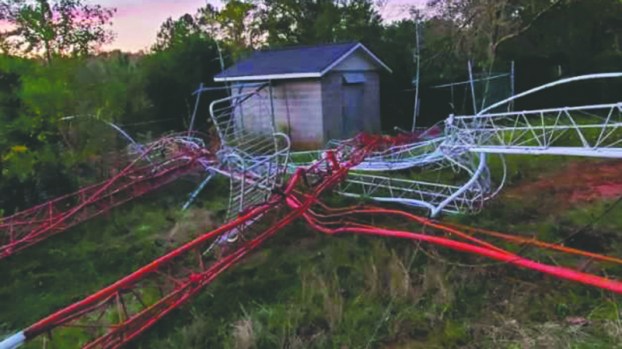 The WOAK radio tower collapsed after a construction accident on Tuesday. --Contributed photo

WOAK radio is off the air for FM listeners, due to a construction accident that resulted in the station’s radio tower to collapse.

According to a press release from the radio station, the accident occurred on property adjacent to WOAK’s radio tower on Tuesday. A guy wire to the 300-foot tower was clipped, which released tension and caused the remaining wires to fall.

“We are thankful no one was injured when the tower collapsed,” said Nathan Woltmann, Director of Operations at WOAK Radio in the press release. “This is a definite blow to the station. However, we know that God works all things together for good.”

The station was founded in 1984 and has been on the air for over 35 years providing Christian programming and music. Woltmann said the station has about a 70-mile diameter footprint and reaches six counties in Georgia and Alabama. The station’s listening area reaches east to Newnan, west to Opelika, AL, north to Franklin and Roanoke, AL, south to Hamilton and all areas between.

“We have been able to determine that on average we reach 15 to 20 thousand people a week,” Woltmann said.

The station, a 501c3 organization, is listener-supported but had to cancel its Spring Share-A-thon this year due to the COVID-19, according to the press release. The station’s Fall Share-A-Thon was scheduled for Oct. 27-30, and will continue as a virtual fundraiser on the station’s website.