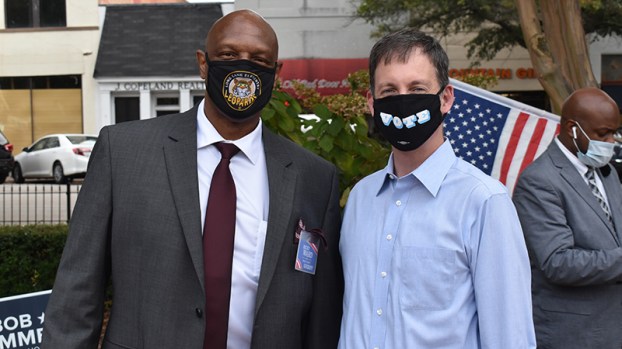 About 50 people gathered in Lafayette Square Saturday morning for a get-out-the-vote rally in support of state Rep. Bob Trammell and other local Democratic candidates.

Trammell asked attendees to vote early and, if they have not already done so, to make a voting plan. He then said the country could not afford another four years of President Trump, emphasizing the importance of protecting the Affordable Care Act and people with pre-existing conditions.

“We have to elect champions (of the ACA) at literally every level of government,” Trammell said.

Trammell said the president has failed to protect the country from the pandemic despite having “some of the most talented scientists and public health officials” in the world.

He criticized Georgia Republicans for refusing to expand Medicaid under the ACA, saying it has left hundreds of thousands of Georgians uncovered and led to the closing of rural hospitals. Trammell then referenced Georgia House Speaker David Ralston, who campaigned on behalf of Trammell’s Republican opponent, David Jenkins, last week in LaGrange. Ralston said at an event that a Georgia controlled by Democrats was “Not a future that I want to be a part of” and “not the Georgia that I grew up in.”

Trammell serves opposite Ralston in the Georgia House as Minority Leader. Jenkins is an Army veteran and helicopter pilot.

Trammell said Republicans “want to buy this seat.” The Republican State Leadership Committee, a group that works to elect Republicans to state legislatures, has spent about $700,000 and plan to spend a total of about $1 million in the race. Trammell’s campaign has spent more than $300,000 in the race, according to campaign finance reports, and the Democratic Party of Georgia has also invested in advertising.

House District 132, Trammell’s district, is competitive — Trammell won reelection in 2018 by about 750 votes.

Ogletree said she was a “new voice and better choice” and asked people to talk to their friends and families and make sure they vote.

“My heart is in taking care of the children, the elders and the workers,” Ogletree said.

Moody said the county should have been better prepared for the pandemic, and that more housing is needed in LaGrange.

“We need to think outside the box. We don’t wait until it comes. In a situation like this [the pandemic], we need planning,” Moody said.

Almonord, a retired doctor who lives on the Columbus area, is running against U.S. Rep Drew Ferguson in District 3. The district contains much of West Georgia, including all of Troup County.

“I am running because my opponent, Ferguson … voted to repeal the Affordable Care Act,” Almonord said.

Ward gave a brief speech. Though running as a Democrat, he said the sheriff should be nonpartisan and represent everybody.