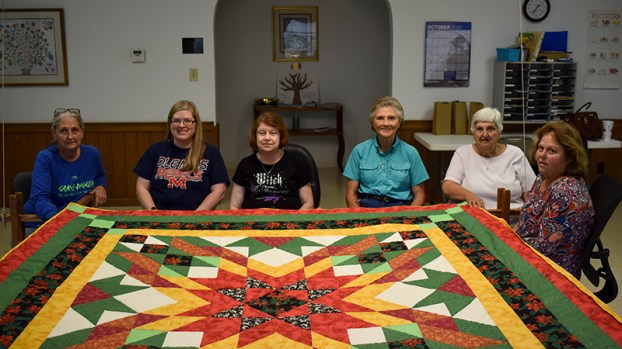 Above, members of Pleasant Grove United Methodist Church sit around the Christmas Star quilt they’ve sewn over the past six weeks.

On Saturday, Nov. 7, the quilters at Pleasant Grove United Methodist Church will hold their 40th annual quilt show/sale and bazaar.

The event will start at 8 a.m. and wrap up at 2 p.m., when a drawing will be held to award a handmade quilt to a ticket-holder. The event will take place outdoors.

Food will be served — sausage and biscuits in the morning, homemade soup and cornbread later and barbecue plates, stew, fried pies and baked and canned items in the afternoon.

Up to 1,500 tickets will be sold for the drawing, and people can buy as many tickets as they want. Tickets are a dollar each and the sales benefit the church. According to the  quilters, some attendees have bought hundreds of tickets yearly and never won, while one  woman bought one ticket one year and won the quilt.

About 10 vendors will have booths where they will sell items such as homemade canned goods, Christmas ornaments, pottery, shutters, home décor, floral items, hair bows and more. Vendors  keep the money they earn at the event, and booths are available for use for $10.

The quilt that will be awarded in the drawing was sewn by church members over a six-week period and is a “Christmas star,” said Carol Cadenhead, who has participated in the event for 33 years.

The design of the handmade quilt changes yearly. As of Tuesday afternoon, the quilters were putting the finishing touches on the Christmas star quilt.

“We had some people ask ‘Why don’t you work on a Christmas quilt?’” Cadenhead said.

The church hasn’t made a Christmas-themed quilt in several years.

The event will also have quilts on display that aren’t for sale but are “pretty to look at,” Cadenhead said.

The event, which Cadenhead said usually raises about $3,000 for the church, is somewhat of a celebration of the “dying art” of quilting.

“Quilting is really fading because there’s not many young people interested in it,” Cadenhead said.

The church’s quilters also raise money for the church by quilting throughout the year for individuals who bring in a quilt top and would like it attached to a quilt.