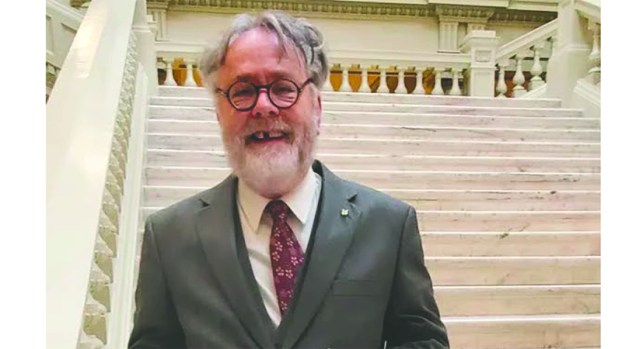 There is no record of a Personal Financial Disclosure Statement (PFDS) for Giles’ campaign, and Giles was fined $125 by the commission in March for not filing a PFDS. There are also two fines for not filing campaign contribution disclosure reports. One report was due at the end of January, another at the end of April. According to the commission’s website, Giles filed the reports in July but was fined $125 each for the missed deadlines.

According to the commission’s site, none of the fines, totaling $375, have been paid.

Reached for comment Thursday, Giles said he didn’t know about the fines and hadn’t been contacted by the commission.

“If I had lots of money, I could hire somebody to take care of all that for me, but like I said, I’ve been doing it all by myself,” Giles said.

According to Giles’ most recent filing, he has raised $250 in the race and spent $271.08. Giles received a donation of $250 from Fair Fight, an Atlanta-based voting rights organization founded by Stacey Abrams.

However, a Sept. 30 filing also listed another $600 raised, despite the “total contributions to date” box on an Oct. 25 filing listing $250.

According to the most recent filing of Giles’ opponent, Republican state Rep. Randy Nix, Nix has raised about $45,000 and spent about $16,000.

A PFDS outlines a candidate’s fiduciary positions, business interests, properties, employment and investments. Georgia law mandates that candidates must file a PFDS within seven days of qualifying for the election.

Nix emailed The LaGrange Daily News Thursday, asking why a story was written on David Jenkins, but not on Giles since similar paperwork was missing. The LDN reported on Wednesday that Jenkins, the air ambulance pilot and army veteran running in House District 132, had not filed his PFDS and was fined $125 in March. Jenkins, who is opposing Bob Trammell in District 132, filed his PFDS on Wednesday.

“I just really wanted to point out what I think the bias of the paper is running that at this particular point in time, missing a personal financial disclosure,” Nix said. “I don’t think should be front page news. And I think it just shows the bias that the paper has in that race, and overall. So, I just wanted to point that out to you.”

Nix has not faced an opponent since 2012, when Giles ran against him. Nix won that year with 76 percent of the vote.