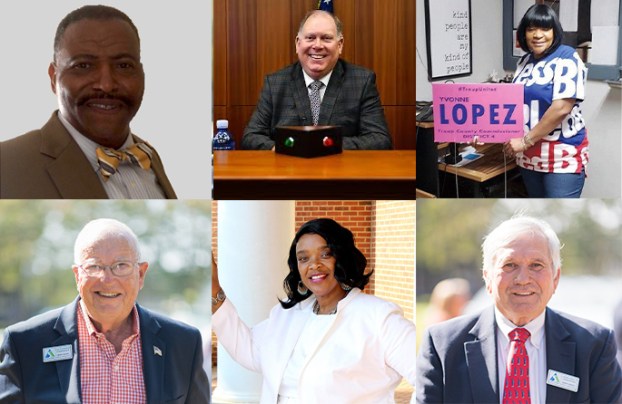 Six candidates for the Troup County Board of Commissioners are running in the Nov. 3 election for Districts 2, 3 and 4. All three seats are held by Republican incumbents — Ellis Cadenhead, Lewis Davis and Morris Jones, respectively. Each commissioner has a Democratic challenger — Cadenhead faces Andrew Moody, Sr., Davis faces Synda Ogletree and Jones faces Yvonne Lopez.

Cadenhead said he decided to run again because he feels like his job isn’t done yet.

“We’ve got some projects and issues going on at the forefront that I feel like need to be completed,” Cadenhead said. “Particularly, the Agriculture Center project and the Event Center project. Those are two that are really big right now.”

Cadenhead added that Troup County Fire Department still has SPLOST dollars dedicated to the department that he wants to see spent responsibly.

“I’ve got a diverse group of citizens in my district,” Cadenhead said. “The communities are different from the township and unincorporated areas. They’re entirely different because they are like their own individual communities. I work and with all of them evenly and handle all their needs fairly.  I have to work with those communities on what is best for all of them.”

District 2 is the largest district throughout the county. It borders Harris, Merriweather and Coweta County and includes the LaGrange, Pine Mountain and Hogansville cities.

Cadenhead said he enjoys sitting down and working with everyone within each city and community.

“I have a long history here,” Cadenhead said. “I understand the needs and wants of the county. I think that’s the biggest thing is understanding the needs and what we need to grow. We’ve got to grow. If you don’t grow, you’re standing still.”

Moody said his biggest goal if elected as District 2 County Commissioner would be to focus on seeing the county spend money in other areas like housing initiatives instead of recreation.

“Hogansville has a lack of housing,” Moody said. “Even though it’s on their agenda to improve the housing up there, they really are lagging behind. We need to build more houses.”

Moody said he would help fix the housing issue by encouraging and bringing in developers into the areas of Hogansville and his district.

Moody added that he would live to see the budget spent more diversely as well. Moody said too much is spent on parks and recreation but not enough on housing and development.

“They need to use the money to make the community better,” Moody said. “We need to reduce the suffering. That’s what leaders do. We don’t need to let problems snowball. We see a tidal wave coming from Atlanta.”

Moody said LaGrange and Troup County need to emerge as leaders during the pandemic.

“We are slacking behind in this middle of this pandemic,” Moody said. “When we were number one for the rise of COVID-19 cases, the county wasn’t doing anything. I feel like they acted like it had disappeared.”

Moody said if elected he would bring leadership qualities to the table and steer the commissioners in the right direction.

Incumbent Lewis Davis said he has always been proud of the transparency he has given the community during four years as a commissioner.

“I’m thankful to have been a part of being able to change our meeting times to both in the afternoon and the mornings now for the community to attend,” Davis said. “We also started live streaming our meetings to make it more accessible to the community. I just encourage people to take more advantage of that. We were also able to hire a social media director that helps people understand what Troup County Government does.”

Davis said even when the commissioners disagree, they all work together well.

“Even when that happens and we don’t always agree, we will still work together for the betterment of Troup County,” Davis said.

District 3 is comprised of mostly the city of West Point and West Point Lake.

“We have got one of the largest manufacturing plants in the state of Georgia in my district,” Davis said. “We’ve got West Point and the lake. We also have rural areas, so it is a pretty diverse district.”

Davis said currently he is working on bringing more attention to West Point Lake and hopes to continue doing that if re-elected.

“West Point is a diamond in the rough,” Davis said. “I think that we are doing everything we can to promote that lake. That is one reason that we are really pushing to build the event and education center at Pyne Road Park.”

The center will be used to not only help promote the lake but also for students in Troup County and the surrounding area to learn about the ecology of the lake and the benefits of having a lake in the community.

“That will help save the lake and keep it clean,” Davis said. “Keeping the lake clean is a big problem. It all starts with education. It is a local problem, but it also is derived from Atlanta because we are catching all the trash that travels down from metro Atlanta.”

Davis said he is working with core engineers on fixing that problem.

If re-elected, Davis said he wants to see the continuation of the community grow.

“There are several SPLOST projects that will affect my district that I want to see completed,” Davis said. “I really enjoy helping my community and I hope to continue doing that.”

Challenger Synda Ogletree hopes to bring a new vision and new perspective to the board if elected.

“I would like to bring a woman, caregiver and motherly view to the board,” Ogletree said. “They need diversity there.”

Ogletree said that as a woman, she would be able to give a safe space for more women to approach the board with their problems and concerns.

She added that she would like to see more transparency with the community and the commissioners.

“We need a routine town hall meeting to see what the community needs,” Ogletree said. “We need better infrastructure because the roads are awful. They started doing some repairing at election time, but we’ve got to have that on a regular routine schedule, not just right at election time. They need to maintain them on a regular basis.”

Ogletree noted that citizens in the Cannonville area routinely have road problems.

“The county did some work out there and left it basically unfinished,” Ogletree said.

She said she would also work on bringing more activities for the youth in West Point.

“I don’t feel like the city is doing their part and I would work with them to fix that issue,” Ogletree said. “We could look at the proper channels to direct them to bring the issues to the front of the city council’s attention.”

Ogletree said she would make it a point to hold the city council accountable for listening and working with the citizens on their problems.

Ogletree would also like the commissioners to be more in the community.

“Instead of them just having meetings at the courthouse, they can move around in the community,” Ogletree said. “If they moved around in different county buildings in different communities then they would actually get to see some of those buildings are worn down. It will make them look at where they’re putting some of the money toward and maybe where money should go to.”

Ogletree said if elected she would bring more engagement within the community and the commissioners as well.

“I would love the community’s vote,” Ogltree said. “Synda is a new voice, a great choice.”

Incumbent Morris Jones, who spent his career working in his family’s timber business, was elected to his seat in 2000 and is seeking a sixth term. He’s a 41-year resident of the district.

Jones said he wants to continue to provide conservative leadership by working with state legislators and congressmen.

“I think my leadership in the next four years will be valuable with my experience,” Jones said, adding that he will ensure efficient spending.

Experience, he said, includes serving during 9/11, the 2008 recession and now, the COVID-19 pandemic.

“I’m just uncertain about the economic status of revenues coming in,” Jones said. “ I think [the next budget] it’s going to be a challenge.”

Jones also said he wants to keep Troup growing by attracting industry so that young people come back to LaGrange to work after college.

Some of the things he’s proud of in his term are the naming of Spinks Field, improvements to Troup County Fire Department equipment and maintaining roads and bridges. In District 4 specifically, he cited the updates made to the McCluskey Tennis Center.

Lopez runs Ark Refuge Ministries, a nonprofit which works with men affected by homelessness, substance abuse, previous incarceration and other issues. She draws on that experience to argue she has leadership and problem-solving experience, has managed a budget and is always “dealing with different temperaments and personalities.”

Lopez has said repeatedly that she wants to be a “voice for the voiceless.” She also said she would bring diversity to the board, which is currently all-male and features one Black commissioner, Richard English.

LaGrange is doing well with economic development, Lopez said, but a segment of people are being left out.

“You get complacent when you’ve been in a seat for that long, and detached from what’s really going on in the community,” Lopez said.

Jones wants the county to have tools to help those people and said keeping the millage rate low benefits them.

Lopez has been in LaGrange for 11 years and said she never knew who Jones was until she decided to run for office. She’d like to do town halls or send out newsletters, if elected.

Some people may not know what’s going on with the county Lopez said, because they’re busy “having to work two jobs just to make ends meet.”

“With the issues that were facing today, especially with COVID-19 and race relations and stuff like that, we need to be more attentive to what’s going on in the community,” Lopez said.

Jones, though, says he’s been responsive to constituents.

“I’ve always gotten back with people that have called,” Jones said. “And I want to continue to serve those people.”