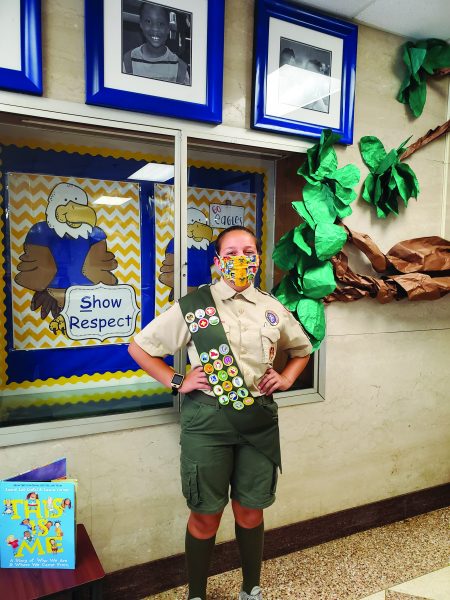 LaGrange girl set to be among first female Eagle Scouts

Tasha Brawner, a 13-year-old who lives in LaGrange, is set to be part of the inaugural class of female Eagle Scouts, having completed her requirements and awaiting her board of review in December.

The younger sister of two male Eagle Scouts, Tasha is a Life Scout, the sixth rank and the last step on the path to Eagle. She has completed her Eagle Project and will be one of the first female Eagles in the West Georgia area. She’s also earned 75 merit badges, more than triple the required 21 for Eagle.

She completed her project at Berta Weathersbee Elementary School, where she had already done volunteer work with Good Sam Ministries. One day, reading to students in the school’s reading room, she realized the students had already read the books and were in need of some new literature.

A plan was hatched to collect at least 1,000 books for the school, as well as build new shelving and reorganize the book room to make it more usable.

The project was conducted in July and August after the pandemic had already started, so Tasha spread the word of her book drive on social media. The books kept arriving in the mail — they came from more than 20 states around the country. By the end, more than 3,000 books had been donated.

“I was able to visit the principal, and he said that ‘We’re so grateful for all the books,’ and that the book rooms were being utilized,” Tasha said. “And the students were taking home lots of the donated books.”

One complication was that the books had to be coded, or “leveled,” using online programs so that teachers and students knew which books were appropriate for different reading levels.

COVID-19 and quarantine forced many of the Troop’s activities online, but Tasha was well prepared, Crystal said. Tasha is home-schooled and attends Georgia Connections Academy, a public online charter school.

Tasha organized Zoom meetings with her fellow scouts to teach them how to code the books.

“She has been in a virtual school for like, four years now. So, she was very familiar with using an online platform to communicate. So, she took the lead in that,” said Tasha’s mother, Crystal Brawner.

The deadline for scouts to make Eagle is their 18th birthday, so Tasha is well ahead of schedule. But there was a tight deadline for her project, as she had to finish it before school started back in August. Work on the book room was finished with a week left. But then, a teacher showed them a second room that was in worse shape.

Despite the time crunch, they renovated the upstairs book room in that last week.

“I really enjoy the leadership in scouting,” Tasha said. “I like that it’s led by kids, instead of the adults.”

More than 2.25 youths have achieved Eagle Scout since its inception in 1912, according to Scouts BSA. From 2009 to 2018, only 6.49 percent of eligible Scouts earned their Eagle, according to Scouting Magazine. Until very recently, they have all been boys.

“It’s definitely special to be one of the first because I’m leading my other scouts and showing them … you will get something out of this,” Tasha said. “And it’s nice to see that people in scouting who were, kind of against girls being in scouts — it’s nice to see that they’re letting up on that and being proud of me for my achievements.”

For Crystal, it was important not to cut any corners.

“If she’s going to make Eagle … it’s more important to us that she’s grown as a person,” Crystal said.

Until recently, Chris Largent was the District Executive for the district that includes LaGrange, and he helped get Troop 31 up and running. He said female scouts had, in his experience, been more diligent.

“Teaching a couple of different mirror badges to the unit and to the girls, quite honestly, they paid attention most times more than what the boys used to,” Largent said.

Largent said Tasha has been “very driven” on her path to Eagle and has “set a different standard for other females in her area, that this is something they can achieve … with dedication and hard work and perseverance.”

“I was excited to see those girls ready and willing to put forth that effort into something bigger than themselves, and take on such a long-term responsibility and investment with their time,” Largent said.