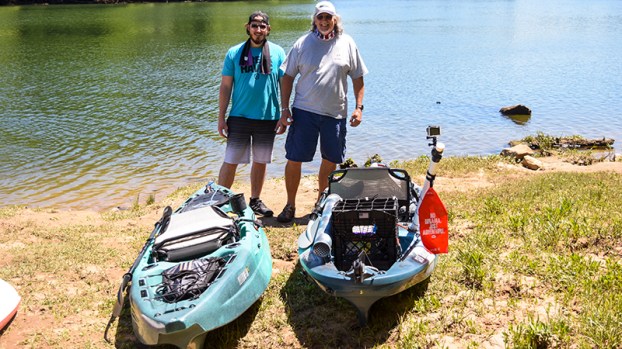 Colorful canoes and kayaks were parked all over the starting area, and the weather was sunny. Many attendants rested under shady trees as they waited for the event to begin.

“This is a chance to get people connected with the water, whether you’re an avid kayaker who has your own kayak, or if you’re somebody new who wants to give it a try,” said Ashley Desensi, technical program specialist with Chattahoochee Riverkeeper. “This is the perfect place to get out on the water. It’s a nice, gentle section of the river.”

Colin Light made the drive from Columbus to take part in the River Rally.

“I expect a leisurely day of enjoying the Chattahoochee,” Light said. “Seeing some wildlife, really just getting out and enjoying the day.”

Others came for a chance to spend some time with family.

“I was looking for a good float down the river with my son,” said Donald Parmer from Fortson. “It’s kind of a bonding thing. Just enjoying the water and to relax.”

There were also many locals in attendance, enjoying time outdoors.

“My dad wanted to go kayaking,” said Frank Parmer from West Point. “It sounded like a cool event. It’s our first year being here, so just kind of giving it a shot.”

A part of Chattahoochee Riverkeeper’s work is to monitor water quality.

“We monitor the river here in West Point as well as over one hundred other locations throughout the whole Chattahoochee watershed,” Jacobs said. “And the water quality in the river… close to West Point, is very healthy.”

He added that supporting Chattahoochee Riverkeeper’s work enables them to continue monitoring the river and hold polluters accountable. The Riverkeeper also held its large cleanup event, Sweep the Hooch, in March.