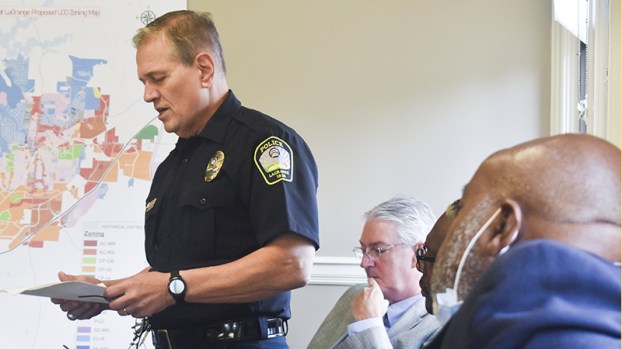 LPD Chief Lou Dekmar updates the LaGrange City Council on his efforts to deal with the issue of dirt bikes on roadways. Solutions presented involved amending the current dirt bike ordinance, 10-20-14, so that dirt bikes must be registered in the city, as well as instilling aggressive fines and impounding violating vehicles.--Shiann Sivell

The LaGrange Police Department is continuing to take a proactive approach to dirt bikes and ATVs on city roadways.

“The public is concerned that we aren’t doing anything [about dirt bike offenders],” LPD Chief Lou Dekmar said. “Because of the inherent danger of their operation on the roadways and the number of complaints that dirt bikes have created as public safety issues, we’ve taken a zero-tolerance enforcement approach.”

LPD won’t be issuing warnings to dirt bike offenders, Dekmar said. Offenders will be cited for any violations that they’re involved in.

Dekmar recently inquired the LaGrange City Council’s help in outlining a stricter resolution to restrict dirt bike use on public roadways. At the council’s Tuesday work session, Dekmar said he was expecting to bring suggested changes to the city’s current ordinance in an upcoming meeting.

Dekmar’s suggestion is that dirt bike riders will have to register their dirt bikes and ATVs and display a tag or an emblem.

The first occurred at approximately 5:27 p.m. in which two offenders, Brandon Reed and Tarik Williams, were charged with driving unregistered vehicles while operating a dirt bike on public roadways.

The dirt bikes were impounded as part of the investigation.

An hour later, another offender, Gatavius Jones,32, was arrested and charged with the operation of an off-road vehicle on the roadway, operating an unregistered vehicle and having no driver’s license.

A second offender fled the scene on foot, but the dirt bike the offender was operating was recovered.

Jones was on probation for driving without a valid driver’s license at the time of the incident.

In the last year, LPD has dealt with 80 to 90 cases of dirt bike offenders, Dekmar said.

The city of LaGrange’s municipal charter states that “the use of motorcycles, dirt bikes, E-bikes, ATV’s or motorized vehicles of any kind or similar vehicles designed for off-road use are prohibited within public parks” and that off-road vehicles, including dirt bikes and ATVs are not permitted on public roads.