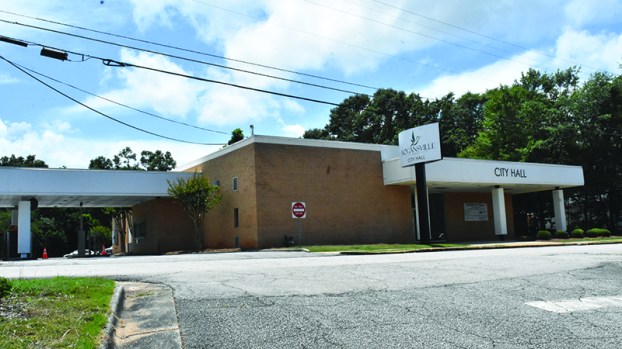 Hogansville's new city hall is housed in what used to be the PNC bank building at 111 High St.

The general public is invited to attend the dedication for Hogansville’s new city hall on June 28 at 6 p.m., according to Hogansville Mayor Bill Stankiewicz, who said there will be a ribbon-cutting, refreshments, and a tour of the building.

The new location, which opened for business on June 7, is housed in what used to be the PNC bank building at 111 High St. The move from the old building to the new one happened sooner than anticipated. Originally, the move was expected to happen “more toward the end of June,” according to Stankiewicz in a previous interview. He estimated that renovating the building took about three months.

Stankiewicz said funding to renovate the PNC bank building came from a USDA loan, a private donor and money that the Hogansville Charitable Trust, a 501(c)3 charity, raised through its annual Hummingbird Festival. The Hogansville Charitable trust will also be paying off the USDA loan. Stankiewicz remarked that when the loan is paid off, the city will have acquired and renovated the building at no cost to taxpayers.

While the loan is technically for 40 years, how long it will take to pay off depends on how much money the Hogansville Charitable Trust will make each year. Stankiewicz anticipates that it may take “a couple or three years” to pay off the remainder of the loan.

One of the major advantages of the new building is that it’s compliant with the Americans with Disabilities Act.

“The old city hall, the old theater was not ADA compliant. And had anybody made a complaint, we would have had to spend a small fortune on making that building ADA compliant,” Stankiewicz said.

He added that the new city hall has room for expansion, whereas the previous one didn’t.

“We have all these homes coming onboard in the next year or two, and we anticipate that we’re going to need more room in city hall. We have that ability; we have that room to expand in that building,” he said.

The Royal Theatre, where city hall formerly resided, will be turned into a “multipurpose entertainment center,” according to Stankiewicz, who said the transformation will cost about $2 million and is anticipated to take over a year to complete. He said that the new venue will show movies, put on plays, and have other kinds of live entertainment.

Strategic partners for the Royal Theatre project include the Callaway Foundation and the Fox Theater Foundation. Funding will also come from SPLOST and a USDA blighted building grant administered through the DCA.