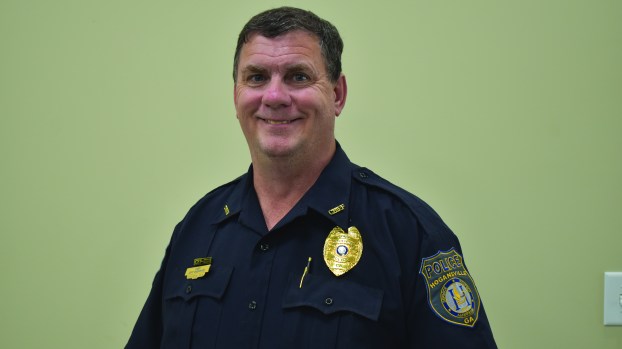 LISTENING TO THE COMMUNITY: Hogansville Police Chief Jeff Sheppard held a public forum earlier this week to hear citizens feedback on the department.

On Tuesday, the Hogansville Police Department held a public forum at Hogansville City Hall in which Chief Jeff Sheppard delivered a presentation on their goals, core values, vision and mission. He explained that the point of the meeting was for the police department and citizens to meet one another.

“We just wanted to introduce ourselves to the people that didn’t know us,” Sheppard said. “I have been visiting churches on Sundays, going around to different ones, doing the same for them. And I also wanted to give people an opportunity if they missed me in the churches to come up here.”

Sheppard emphasized that the Hogansville Police Department aims to prevent crime rather than catch criminals.

“A lot of police departments and cities measure their success based on arrests, tickets, and things of that nature. We base our success on low crime rates,” he said.

The four core values Sheppard presented were for the police department to treat people, including criminals, with dignity and respect; to give individuals a voice during encounters; to be neutral and transparent in decision making; and to convey trustworthy motives.

Sheppard elaborated on giving individuals a voice during encounters.

“Sometimes the best thing you can do is just let them vent. And that’s in all situations. That’s not just if you’re arresting them or if you’re there for something police related. We go to car wrecks, we go to deaths in homes, everything from the accidental death all the way up to the suicides,” Sheppard said. “A lot of times our officers sit. They will sit for hours and listen to these people because they just need somebody to vent to.”

The Hogansville Police Department’s vision, according to Sheppard, is to “provide the highest level of public safety through professionalism and community partnerships, ensuring a safe place to live, work, and visit.”

The HPD’s mission, according to Sheppard, is to safeguard citizens’ lives and property, to preserve the constitutional rights of all people, and to enhance the quality of life in their community.

“We are showing that there’s not going to be a difference in the way we treat the African American community, the White, the Hispanic, the Korean. Whether you’re straight, gay, your religion or anything, we don’t treat anybody differently because of their differences. We treat them exactly the way the law is written and the way we would want to be treated,” he said.

Sheppard explained that the relationship between police officers and citizens is particularly friendly in Hogansville.

“We interact with our community more. People don’t hesitate to call the police department even if they have a complaint on somebody else or the police department here. I think Hogansville is a little different,” Sheppard said. “We’re in our own little bubble. And for the most part, everybody — the citizens, the officers, the city workers who work here, and everybody that lives here — are respectful of each other.”