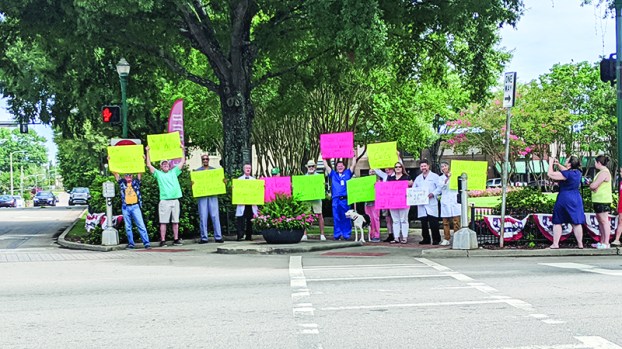 On Saturday, various physicians and other healthcare workers gathered at Lafayette Square with signs urging passersby to get vaccinated.

The event was put together by the Troup County Medical Society, according to its president, Dr. Kenneth Horlander, who is also a pulmonary and critical care doctor and works at Emory at LaGrange and Wellstar West Georgia Medical Center in LaGrange.

Horlander said local hospitals are seeing a lot of COVID-19 cases, some of them severe.

“We wanted to give a positive message to the community that these physicians and practitioners believe in the vaccine, believe that it’s safe, highly recommend getting it, and it will save lives,” he said.

Horlander said the group was particularly concerned about Troup County, which has had large numbers of COVID-19 cases during the pandemic but continues to have a low number of vaccinated residents.

In contrast, 26% of Troup County residents have been fully vaccinated, whereas 29% have had at least one dose of a COVID-19 vaccine.

Horlander said he hears many “excuses” from people who don’t want to get the vaccine, some not trusting the system that put together the vaccine.

“Sometimes they say that they feel like it was rushed through,” he said. “They’re worried about complex adverse effects from the vaccine. They hear things about something that the vaccine may have caused, and they believe then forever that it causes those problems.”

Horlander gave the example of the vaccine supposedly causing trouble with pregnancy, which he said has been shown to be false.

He explained that for the sake of transparency, the FDA sometimes publishes information about possible adverse effects of the vaccine.

“And then they find that it’s not a problem with the vaccine, but the community doesn’t hear that part, even though it is out there on the news if you look for it,” he said.

Horlander said many people are too quick to blame the vaccine for causing illnesses that existed before the vaccine did.

“I think if even one person or a small group of people decides to get vaccinated based on something we do, then we’ve potentially saved more than one life,” he said. “And that’s the reason to go ahead and do something like this.

Dr. Kenneth Gordon from LaGrange Internal Medicine said getting vaccinated against COVID-19 is appropriate for the vast majority of people.

“In my practice in Internal Medicine, I’ve had exactly two people that I’ve recommended not to get vaccinated,” he said. “But everybody else is a good candidate for it. The risk of vaccination is very small compared to the risk of the disease.”

“Within the first quarter of the year, we had done nearly half of our normal volume,” she said. The accidental, suicide, homicide, and undetermined rates didn’t really change much.”

While Hackley’s team doesn’t test the deceased for COVID-19, she said she felt confident that there was a connection between the increase in natural deaths and cases of COVID-19.

“A lot of people were told to just go home and quarantine. They did not actually get tested,” she said. “I’m just speculating that the large number of natural deaths were related, just by symptoms. None of the death certificates were actually coded as COVID though.”