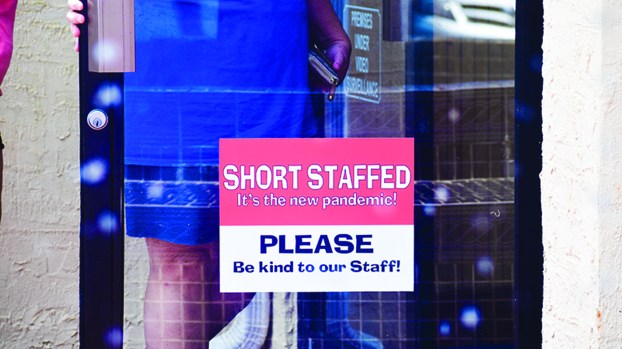 Due to the ongoing ripple effects of the COVID-19 pandemic, local restaurants are still grappling with changes from staff shortatges and other related issues.

Hiring continues to be an issue for area restaurants, though some have had more success than others.

Local eateries are having to adjust to having fewer staff members and more customers, plus an ongoing truck driver shortage that continues to impact supplies.

Back in April, Chase Hudson, co-owner of Mare Sol in downtown LaGrange, closed his restaurant for a day to give his overworked staff a day off as the restaurant grappled with staffing problems.

Almost three months later, the problem has continued for Hudson, but not in terms of the number of employees he has.

“It’s not a number problem,” Hudson said. “It’s that people are not willing to work full-time the way they have before.”

Restaurants like Mare Sol are not alone. Restaurants all over LaGrange have “now hiring” signs for a variety of positions. Due a lack of staff to help operate them, several chain restaurants like Captain D’s and Zaxby’s still have their dining rooms closed, running on drive-thru service only.

According to July statistics from the Georgia Bureau of Labor Statistics, restaurant employment continued along the long road to recovery in June. Restaurants added a net 194,300 jobs in June on a seasonally-adjusted basis, the statistics states.

June was the sixth consecutive month of staffing growth, which translated to an increase of more than 1 million jobs during the first half of 2021.

Despite the steady gains, eating and drinking locations were still nearly 1.3 million jobs – or 10 percent – below pre-pandemic employment levels, the statistics state.

Some employers across the nation continue to offer incentives for new hires, said Karen Bremer, the CEO of the Georgia Restaurant Association, noting that many restaurant workers left the industry to pursue new opportunities during the pandemic, thus helping ignite the current shortage.

“Some [restaurants] are offering [incentives], but most are being very cautious,” she said.  “If one offers a bonus or higher wages, then all current workers expect the same.”

The restaurant industry is the second largest private sector industry, falling just behind the agriculture industry, Bremer said, adding that Georgia is the sixth largest restaurant state in the U.S.

Some restaurants have had an easier recovery than others.

Johnny’s New York Style Pizza in West Point, like many restaurants during the pandemic, had to adjust hours to accommodate for the take-out only service they were offering at the time. Though the pizzeria lost a few staff members, they didn’t have to lay anyone off, said owner Ben Hamilton.

Now, the pizzeria is back to a full functioning staff, though many staff members are working more hours than they have before, Hamilton said.

“We tanked off for a while with just to-go, but we’ve kept the same level of staff,” Hamilton said.

“Currently we have 36 on staff, but we’re about to lose about eight of our staff [members] who are going to and back to college.”

Hamilton added that the truck driver shortage had affected his business as well.

“We haven’t had to alter our menu as of yet, but it has affected our delivery days,” Hamilton said. “We’ve had issues with our [product] being delivered 24 to 36 hours after our scheduled delivery day,”

Bremer said that she has been in contact with other restaurants around the state who are having a similar problem.

“We are hearing that complaint,” she said.

“We are getting more comments about the fact that in rural markets the trucks from Atlanta that used to bring their orders have gone from two to three times per delivery [a week] to only once a week, so then you have to go to the grocery store to try and find products to substitute for items on your menu.”

In June, the Georgia Department of Labor recorded that unemployment claims in Troup County alone increased significantly at 1,753 claims compared to May’s 921 claims.

“We are continuing to see an increase in the number of jobs available and very few actual reported layoffs through the WARN system, both good signs of an improving economy,” said Commissioner of Labor Mark Butler.

“We must continue to work together to connect those seeking work with the many jobs available that offer stable salaries and competitive benefits.”

In Three Rivers, the unemployment rate increased in June to 4.4 percent, an increase of five-tenths percentage points. A year ago, the rate was 9 percent.

Up and coming restaurants in the area like Chicken Salad Chick, which is set to open outside of the LaGrange Mall on Aug. 11, has so far had an easier time getting a new team of workers together.

“We really did have a great response, and we were able to get the amount of people we needed to open,” said Allison Bradford, the LaGrange location’s owner.

The next two weeks will still be a test for the new eatery despite the success, Bradford said.

“Things can change, but it helps that we’re new to town and people are excited,” she said. “

We’re very fortunate to be in the situation that we’re in.”