After a week off, LHS plays Columbus with a… 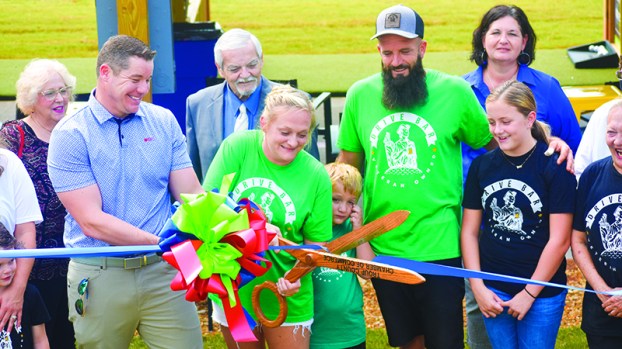 Hogansville will soon have a new family-friendly hangout spot just steps away from its downtown.

Cousins James Bailey and Brett Chapman, along with a host of family members, friends and local leaders celebrated the finished refurbishment of the Drive Bar, a bar/top racer driving golf range, on Tuesday and are set to open fully this weekend.

The hopes for the new business will be to create a relaxing hangout spot for families in the area where they can play a rousing round of top racer golf, which features games and modes suited for players on any level or have a snack within the bar or on its patio.

Drive Bar is located at 218 North Hwy, the former residents of Hogan’s Heroes sandwich shop and then barbeque restaurant called Hog Heaven, Bailey recalled. Noting the building’s historic value to the community, the owners kept the design simple but played into the nostalgia of the building at the same time.

The green theme, accented with sports and military memorabilia throughout the building, was a nod to the Hogansville Elementary School’s Greenwaves where Bailey attended.

Along with its on-tap beverages, Drive Bar will serve sandwiches from Main Street Market and will host a variety of food truck vendors each day. Bailey said the goal in mind is to bring businesses from outside of Hogansville closer and ultimately encourage relationships with the involved businesses within Troup County.

The business will also be a welcoming haven for military personnel. Bailey and his wife, Britney Bailey, are both former United States Navy members. Bailey joined the United States Navy after graduating from Callaway High School and met Britney while they were both stationed in Norfolk, Virginia.

For their official grand opening on Saturday, Sept. 11, Drive Bar will be offering specials to military and first responder personnel.

“First drink is on us when [they] come in,” Bailey said.  “It will be sort of a tie-in for what military and first responders have given us…”